TOUR 2018 – IT’S IN YOUR NATURE TO DESTROY YOURSELVES

Here he comes. Maintaining his strict record of only ever updating his website when there’s a tour on.

So it’s a new show about the looming self-induced apocalypse. But the title is a quote from Terminator 2 so I’m clearly still being A LOT OF FUN. Here’s the press release:

Double Edinburgh Comedy Award Nominee, Nish Kumar is taking his brand new show on a national tour of the UK. The title is a quote from Terminator 2. There will be jokes about politics, mankind’s capacity for self-destruction and if this will lead to the end of days. GOOD FUN STUFF. He’s the host of the Mash Report, which you might have seen on BBC 2 or on a Facebook video posted by someone you went to school with but haven’t really spoken to in a while.

As seen on Live at the Apollo (BBC2), Taskmaster (Dave), Live From the BBC (Netflix), QI (BBC2) Have I Got News For You (BBC1) and Joel & Nish Vs The World (Netflix/Comedy Central)

“One of the best young comedians we have” The Times

“Intelligent, inventive, thought-provoking and delivered with a passion, urgency and enthusiasm that makes an hour feel like a fantastic ten minutes” Time Out

I’ll be working it up at the Monkey Barrel in Edinburgh August. These shows will be cheaper than the tour because they may be shit.

Once the tour starts the ticket price will increase on the basis that the material will, at the very least, be a polished turd. Here’s the Edinburgh ticket link:

And here’s the first batch of tour dates. I know this doesn’t cover most of the UK but we will be constantly adding dates over the coming months. Please bear with us and we will get to somewhere near you if you live in the UK. Dates and ticket details below: 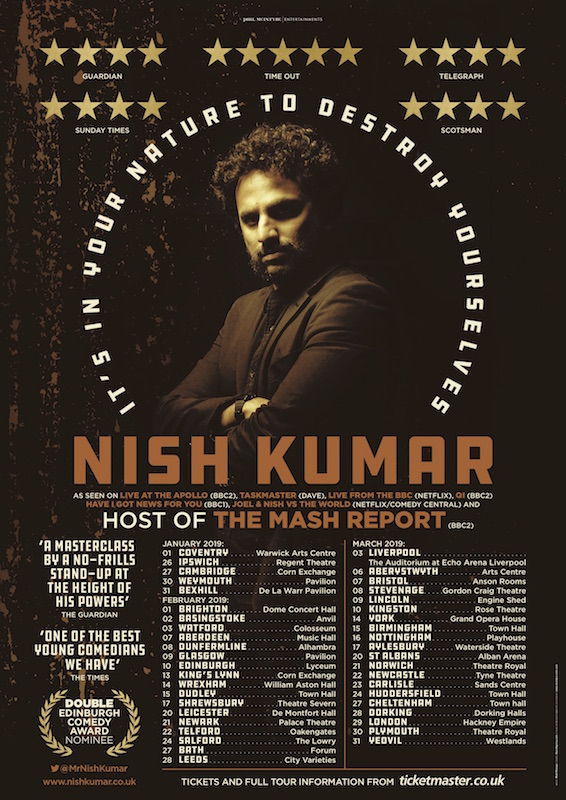