What it’s like working on a weekly satirical show

“You certainly picked the right week to come in.”

It’s Monday morning and I’m in the Shepherd’s Bush offices of The Mash Report, BBC Two’s satirical news show hosted by Nish Kumar. The series flew under the radar somewhat when it first aired in July of last year but the 2018 version has been a very different proposition. A segment featuring Rachel Parris mocking the idea that men are afraid to compliment women for fear of being accused of sexual harassment reached more than 24 million views online, while Ellie Taylor’s message from women everywhere was shared by Sarah Silverman on Twitter with the words “Britain is cool”. It is safe to say The Mash Report is having a moment.

All of this, though, is nothing compared with the press generated by one recent episode. After Piers Morgan’s interview with Donald Trump, the show mocked the sycophantic nature of the exchange by broadcasting a graphic cartoon spoofing the Good Morning Britain presenter’s interviewing style. Morgan, in his typically understated way, repeatedly tweeted the image and suggested he was somehow the victim of something.

Despite the fact that they are aware they have to record half an hour of comedy for the BBC on Wednesday night, the group working with Kumar on his monologue and “minilogue” are surprisingly relaxed. They watch Tom Cruise trailers, discuss Dave Chappelle’s recent London shows and laugh a lot. Kumar is unassuming and genial and you can sense he has chosen to collaborate with these people (Tom Neenan, Ahir Shah and Sarah Campbell) because they are kindred spirits and theirs are the kinds of voices still heard all too rarely on terrestrial television. Above all, one gets the feeling they are friends and it is little surprise that they head out for lunch as a team.

The show is put together in segments because 20 people in a room arguing over jokes is a recipe for disaster. This approach makes the clips perfect for sharing online although there has been no pressure from above to do bitesize viral content; it’s merely a happy accident. Kumar and his team work on his bits while a quieter and more restrained selection of writers are next door attempting to come up with the spoof headlines that punctuate the show. Parris is elsewhere knowing the viewers now eagerly await her routine after recent triumphs. More people are watching than ever before and even the Sunday repeat, buoyed by social media shares from the likes of JK Rowling and the cast of Parks and Recreation, brought in a very healthy number of viewers.

When the gang has finished discussing Black Panther and the relative sizes of various monsters, they start to seriously ponder what the topic of Kumar’s monologue should be. The host is proud that this is one of the few places on British TV for a sustained monologue on a single issue so feels it is imperative they choose something he feels passionate about. Suggestions and jokes are proffered as Kumar paces the room, stopping only occasionally to ask if anyone is actually getting any of these ideas down on paper. Eventually, when there is enough to work with, he retreats to a room on his own and starts to fashion the thing into a coherent monologue in his voice.

Two days later and it’s the morning of the recording. Neenan (as he’s referred to by Kumar, his erstwhile double act partner and university friend) is the only writer in the building who was present on Monday. The pair have an almost telepathic understanding and it is vital for Neenan to be able to shoulder some of the responsibility as his friend prepares to perform in front of the cameras. They make amendments in the morning to keep the jokes as fresh as possible and are seemingly on friendly terms with just about every member of the crew.

There is a brief read-through first thing before a rehearsal in the afternoon, with the cast in casual attire. Kumar sees himself on the monitor without makeup and suggests he looks like he belongs in the video for “Thriller”. He later informs me that three pilots were shot last year and he hoped he might get a bit part on the show, little realising he’d end up the face of The Mash Report. Like the rest of the team, he seems acutely aware of what a fun job this is and has no intention of taking it for granted. He is utterly determined to make the show as good as is humanly possible and, to borrow a phrase from The Larry Sanders Show, he’s “like one of those goddamn creatures out of Greek mythology: half-man, half-desk”.

With minutes left before the recording begins, rewrites are still happening to perfect the wording of certain jokes and ensure the logic of each gag makes sense. Kumar’s manager pops in at the very last moment and discusses a trip to America and a plethora of exciting future projects. All this on his plate and the comic still finds time to analyse whether Jose Mourinho is getting the best out of Paul Pogba at Manchester United while devouring an emergency banana.

Kumar claims hosting the show is “terrifying” but one gets no sense of this when the cameras start to roll. He jokes with the audience, riffs his way through any mistakes and generally ensures the tedious business of reshooting sections is as painless as possible. Neenan sits backstage watching on a monitor, analysing the response to every joke like a manager watching footage in preparation for a big match. When the filming is over, Kumar comes into the green room and grabs a well-earned beer. He’ll enjoy this evening and wake up with a sore head tomorrow but he can’t lounge around for too long; he’ll have to start work on next week’s show soon.

The Mash Report is on BBC2 on Thursday at 10pm 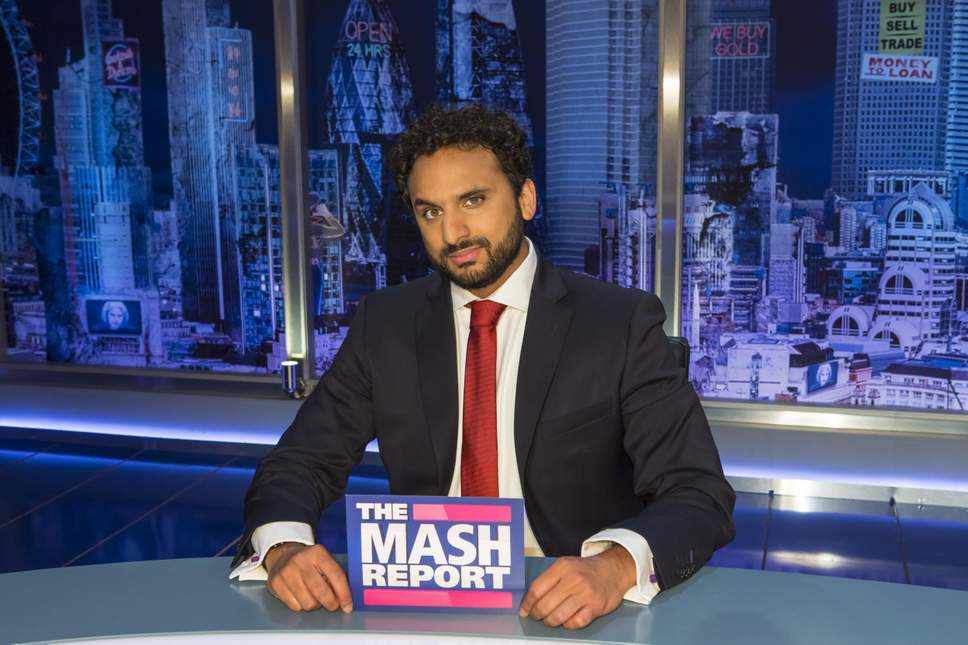