The diary of David Davis, aged 69 years and one week

What’s the Brexit secretary been up to? Nish Kumar has the scoop

Written by Nish in The Guardian on December 30th, 2017 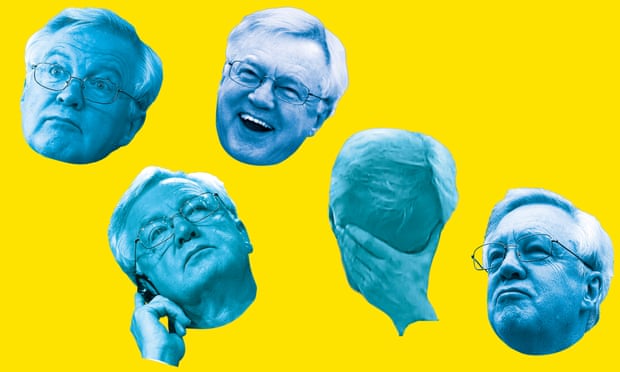 The Guardian has obtained a copy of what appears to be Brexit secretary David Davis’s personal diary from 2017, found on a bench outside the Tunbridge Wells branch of SuperSquad Paintball.

Spent NYE with the guys from my Andy McNab book group. Got a pounding hangover. I feel like I’ve got a Boeing AH-64 Apache helicopter hovering inside my skull. In spite of that, really looking forward to showing Brexit who’s boss (me).

The PM triggered article 50 today, and there’s some chat in the office about how I should “spend more time at work and less time on the climbing wall in my shed”. I tell them to pipe down, and that the climbing wall is where I do my best thinking. (After all, that’s where I came up with the idea of having T-shirts for ladies to wear that say “It’s DD for me” across the boobs.) So I think it’s pretty clear I’m not going to solve Brexit sat behind a desk. I’m going to solve it by getting my climb on.

Yours at altitude, DD

9 June
The morning after the election. Theresa’s had a shocker. Sending her a pick-me-up present. A “Keep Calm and Carry On” mug and an “It’s DD for me” T-shirt should suffice.

Just had to do an interview with the Bolshevik Broadcasting Corporation (lol). They were asking about our Brexit reports – I fobbed them off nicely. “We’ve got 50, nearly 60 sectoral analyses already done,” I said.

Took the rest of the afternoon off to have a good old climb.

17 July
Bonjour, DD (obviously this is ironic; we both know I don’t approve of French in any way, be it the language, the people or the toast).

Turned up at the EU for a conflab with the pencil pushers of Brussels. I walk into the room and give it my classic greeting: “Achtung Eurowankers – it’s double DD.” True to form, the absolute squares had turned up with piles of notes. I had nothing, like a legend. Just flashed the pearly whites for a quick photo op that the papers lapped up. I pretended to pay attention for a couple of hours and then left to sink a few strong Belgian lagers. When in Rome (Brussels) and all that.

More questions about the impact reports. I brilliantly bought us more time by saying they had “excruciating detail”. In reality, I’ve just got a piece of paper that says “Brexit?” on it, and then some ideas for possible SAS codenames for yours truly. Current fave – the Silver Cobra.

Yours anonymously, the SC

6 December
Bad day. Had to fess up that we haven’t so much “done” the reports as we have “not started”. Copping some serious flak in the press for it. Might have to start doing some work. Been walking around the office, quipping that, “I’ve worked so hard pretending to work that the real thing will be easy”, and everyone was loving that comment, silently.

7 December
To be absolutely fair, the EU’s Wikipedia page is very informative.

11 December
Been riffing out some absolute gold in interviews in the last couple of days. My Territorial SAS training has really helped, especially the stuff about staying composed under pressure and how to do up your tie nicely. Got a question about a future trade deal with the EU, and I’ve said we want “Canada plus plus plus”. This basically means it’ll be the same, but it’ll be written in ALL CAPS and in a way better font.

Then clarified the stuff about the impact reports by saying we don’t need them, and dropped this pearl: “When you know those things, you know what you need to know.” I think I’ve got my next T-shirt slogan. As long as I can work in something about tits.

12 December
Getting some blowback after saying the agreement was a “statement of intent” and not legally enforceable. Guy Verhofstadt has got his Euro-knickers in an almighty twist and is getting harsh. Normally I would admire the no-nonsense vibe of a man quite literally called “Guy”, but this bloke is absolutely doing my head in.

14 December
One of the lads from the McNab book group suggested an afternoon of paintballing. And I needed it, I’ve been working upwards of three hours per day and DD is DDrained. This is what I need to clear my mind. I’m going to be a more considered and detail-oriented DD. Nothing is going to escape my attention.

That is the final entry. The diary was found among full printouts of the Wikipedia pages for Brexit and article 50, as well as a hand-drawn comic entitled The Silver Cobra.

• Nish Kumar hosts The Mash Report, which is back on BBC2 on 18 January at 10pm.

Previous So it’s Shakespeare out and Shaggy in at Cambridge?
Next My name is Nish Kumar – so please stop calling me Nish Patel