If the Brazilian superstar’s father can play a crucial part in the transfer of a lifetime, what could my dad do for me?

Written by Nish in The Guardian on August 6th, 2017 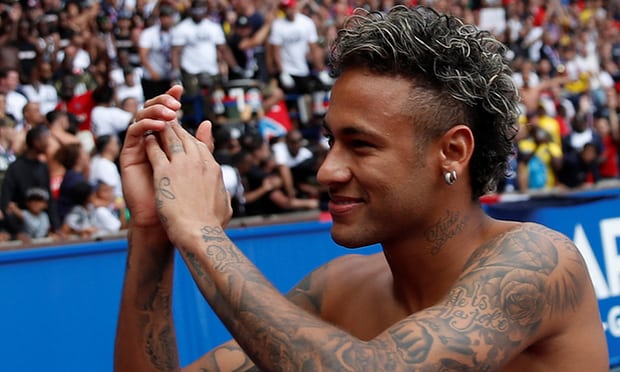 The football world was rocked last week by the news that the Brazilian player Neymar has been sold to Paris Saint-Germain for a head-exploding sum of £198m, a figure almost eight times larger than the GDP of the island nation of Tuvalu.

On Saturday morning, pictures were circulating of the cheque that sealed the deal. Perhaps the biggest shock of this whole thing is that PSG paid by cheque. I genuinely didn’t know that people still used cheques. I had simply assumed that they would do a Bacs transfer. I thought the chequebook had gone the way of the CD, the landline and the concept of liberal democracy; outmoded and unnecessary in the fast-paced Trumpian dystopia of 2017.

To compound my confusion, the cheque they used is just a normal-size cheque. If you’re going to smash a transfer record at least have the decency to get one of those enormous novelty cheques like we used to have in the 1990s. Where is your sense of spectacle, PSG?

The deal has been expedited by Neymar’s adviser, who, as has been reported in various news outlets, is “coincidentally his father”. I would suggest that there is no coincidence involved here at all. I’d argue it was very much deliberate. I’m not sure Neymars Snr and Jnr arrived at work and saw the other one and exclaimed: “What are you doing here? I thought it was another Neymar – small world!”

Neymar Snr and others, including the agent Pini Zahavi, stand to make around £34m from the deal. Inspired by this, my father suggested he become my adviser. I suggested that the numbers might not be as astronomical. Professional footballers tend to operate in a different financial realm to critically acclaimed (a phrase used out of politeness, instead of the more accurate “largely unknown”) standups. He refused to let the matter lie, saying that in order to “be like Neymar, you have to think like Neymar”. I informed him of what I was being paid for writing this article. He went away and calculated his percentage, before returning and suggesting that maybe now was “not the right time for a career change” for him, but that we should “stay in touch”.

The reality is that football hasn’t gone mad. It made that journey several years ago and there is no sign of the bubble bursting. For many of us, football is both a source of frustration and absolute euphoria. Knowing his transfer is evidence that the game is a bloated monstrosity sadly will not detract from the simple pleasure of Neymar’s seemingly effortless, elegant genius.

Previous We are living in The West Wing written by Adam Sandler – no wonder we’re looking to snack companies for sanity
Next Want to change your look? We have an app for that