Calling Donald Trump: here’s how to handle an infant heckler

That crying baby has shown more courage than the entire Republican leadership. But as a standup comedian I sympathise with the candidate

Written by Nish in The Guardian on August 3rd, 2016 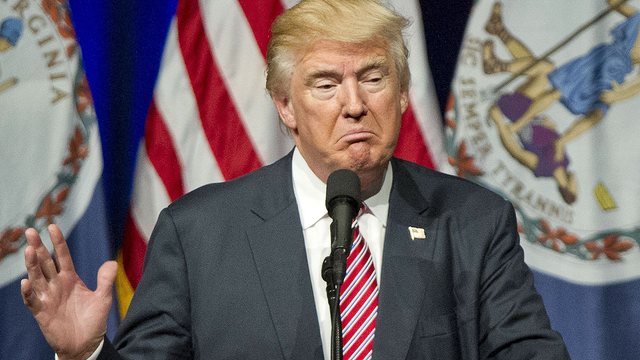 Given the incessant chaos of the past couple of months, it has been a comparatively quiet week in British politics. Other than the news that, as a 30-year-old, I have about as much chance of owning my home as I do of winning a Queen Latifah lookalike competition, or the unlikely news that McDonald’s has claimed the moral high ground among burger vendors simply by not conspiring to deport migrant workers, it has been a calmer week. In many ways, it has been all quiet on the Brexit front.

So where should we in the humour community turn for news nuggets that we can consume, digest and subsequently defecate out as sweet satire? We hungrily look to the US in hope – and we are not disappointed.

DONALD TRUMP WAS HECKLED BY A BABY. Yes, the joke-candidate-turned-actual-presidential-nominee has been heckled by a baby. At a rally in Virginia, Trump’s speech was temporarily interrupted by an infant’s tears. Trump was initially calm, telling its mother: “Don’t worry about that baby. I love babies. I hear that baby crying, I like it. What a baby, what a beautiful baby. Don’t worry, don’t worry.” (Incidentally, it is only when you transcribe Trump’s remarks verbatim that you realise the extent to which his speech patterns are truly weird. They bear no resemblance to normal conversation; they are rhythmically unique, like avant-garde jazz. Trump is the Miles Davis of talking.)

Trump soon lost his patience and uttered a phrase soon to be added to the canon of soaring American oration. To a book that contains Martin Luther King’s “I have a dream” and Franklin D Roosevelt’s “The only thing we have to fear is fear itself”, we can now add: “You can get the baby out of here.”

I have to admit, watching the footage, I sympathised with him. As a a standup comedian, I have been exposed to a wide variety of heckles, from “This is awful”, to “Get a real job”, and “You’re a huge disappointment to me and your mother”. So may I humbly suggest a few stock comebacks from the comedian’s handbook: “Hey Baby, I don’t come down to where you work and cry and shit myself”; “Hey Baby, douchebag says ‘wah wah’ – you said it! That means you’re a douchebag!”; “Hey Baby where did you learn to whisper? In a helicopter for babies? ZING!”

I have always felt a huge amount of kinship with Trump. We have a lot in common. We both have big hair, we have both been on television, and neither of us should, under any circumstances, become president of the United States.

One of the issues here is that we don’t know if the baby was wailing supportively, or if they were cries of dissent. A group of protesters were also removed from the rally. Perhaps this baby was one of them? If so, Trump may have finally met his match.

Throughout this campaign, Trump has responded to criticism of his bellicose rhetoric with garbled nonsense. He alleged that Mexican-American judge Gonzalo Curiel was being unfair on him in the Trump University court case because: “He’s proud of his heritage. I respect him for that.” Then, last week, he responded to Khizr Khan’s Democratic convention speech about his Purple Heart-winning Muslim American soldier son, Humayun, by attacking Khan’s wife, Ghazala. “If you look at his wife, she was standing there. She had nothing to say. She probably, maybe she wasn’t allowed to have anything to say. You tell me.”

But how can he compete with criticism that takes the form of non-verbal shrieking? You can’t beat a baby in a nonsense contest. They literally make no sense. This is what happens when an unstoppable force meets an incoherent object. It’s a political match-up for the ages. I look forward to this being dramatised. Perhaps Peter Morgan could get to work on Trump/Baby. It could have the same cast as Frost/Nixon but with Frank Langella as Trump and Michael Sheen as the baby. It’s a tricky role for a 47-year-old man but Sheen could pull it off; the guy is a chameleon.

The Democrats should absolutely sign the baby up – it could prove an invaluable asset in the coming months. In fact, if Hillary Clinton hadn’t already picked Tim Kaine as her running mate, I’d imagine this kid would be all over the ticket. It would have gone some way to offsetting Clinton’s serious demeanour and decades of political experience, both of which seem to be hampering her candidacy in the eyes of much of the US electorate.

The baby has no vested interests and is not susceptible to the lure of corporate America, aside from the powerful nappy lobby and the Breastmilk Industrial Complex. Also, vice-president is probably the right level. Given the scepticism towards an incredibly qualified woman, I’m not sure the US is ready for its first baby president.

There has been more criticism for Trump. John McCain, Paul Ryan and Chris Christie criticised Trump’s remarks towards the family of Captain Khan, which is frankly too little too late, especially as none has withdrawn their endorsements. (Trump, meanwhile, repaid the favour by suggesting he won’t endorse McCain or Ryan in their own re-election campaigns). In the context of everything he has said so far, criticising the family of a man who died fighting for his country is entirely unsurprising. These men all endorsed Trump’s candidacy for their own political gain. They have sown a misery we may soon all be forced to reap. Just by expressing some dissent, the baby has shown more courage and political conviction than the entire Republican leadership. And for that, if nothing else, the kid’s got my vote.

Previous No one told me to ‘go home’ for 16 years. Then we voted for Brexit
Next Schoolmates used to ask me about Indian trains. I can now confirm British ones are worse